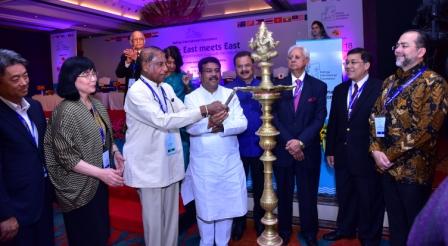 Inaugurating the international conference, Union Petroleum Minister Dharmendra Pradhan said this conference is a first of its kind in the state where top dignitaries and experts from neighbouring countries and the wider Indo-Pacific region have gathered to deliberate on issues of mutual interest.

“Coming from Odisha, we have grown up with stories of people from across the ocean with whom our ancestors traded—from textiles to spices to betel nuts. Our mythologies, languages, religions and architecture have seeped into each other in ways that have not yet been fully understood, or explored,” he added.

“KIF is pleased that now, the North East and Eastern region of India will be in dialogue with the friendly neighbours on India’s east – Bangladesh, Bhutan, Nepal and Sri Lanka, with ASEAN partners and beyond with Australia and Japan,” said Mansingh.

Adding to this he said that, the title of the dialogue is aptly named PURBASA, meaning the rise of the East, the hopes from the East, and, the message from the East.

Gamini Jayawickrama Perera, Minister of Buddha Sasana, Sri Lanka, Chandra Mohan Patowary, Minister for Industry and Tourism of Assam and Ambassadors of Indonesia, Myanmar, Philippines, Thailand and Vietnam, High Commissioners of Sri Lanka and Bangladesh and the Economic Minister from Japan were also present during the inaugural event of the three-day long international conference.

On this occasion, the Kalinga Saraswati Samman was conferred to noted scholars: Prof V Suryanarayan for his book together in struggle: India and Indonesia, 1945-1949 and Sudip Sen for his book the pride and glory of Bali Yatra.