Bhubaneswar: In an unfortunate incident, a person was killed after being run over by a truck in Odisha’s Ganjam district on Saturday.

The deceased was identified as Swarajya Behera of Bhabadipatapur.

Meanwhile, a palpable tension has prevailed in the areas as family members and villagers blocked the road alleging that Swaraj has been killed as he along with others had been opposing a stone crusher unit operating in the village. 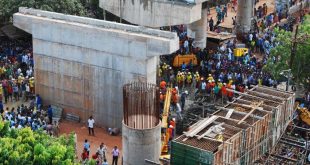