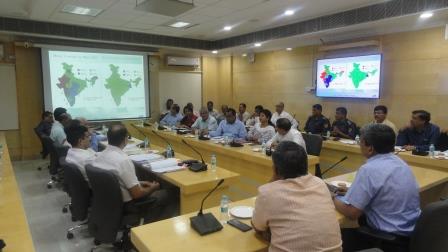 Bhubaneswar: The Odisha government on Thursday reviewed the preparedness to deal with the possible pre-monsoon cyclone in the state.

A meeting was held under the chairmanship of Chief Secretary AP Padhi here to review the state of preparedness by the related departments and agencies to encounter the pre-monsoon cyclone if any.

Regional met centre director Sarat Chandra Sahu said that quantitatively the monsoon seasonal rainfall is likely to be 97% with a model error of ± 5% this year. Doppler Weather Radars are functioning at Paradip and Gopalpur which will help for cyclone tracking and forecasting. These radars also help in forecasting tornado, thunderstorm and hail-storm.

177 Automatic Rain Gauge (ARG) Stations and 37 Automatic Weather Stations (AWS) have been installed by IMD all over the state.

Chief Secretary observed that IMD should explore the possibility of working out region-wise rainfall predictions since generalized predictions do not help much. Similarly, predictions for localized disasters like thunderstorm/ hailstorm/ lightning should be more location specific instead of being for the entire district or a number of districts.

He further directed to pursue the matter with the Government of India and IMD, New Delhi for installation of Doppler Radars at Sambalpur and Balasore at the earliest.

BSNL authorities reported that BSNL has necessary arrangements in place to keep the telecommunication system operational in a cyclone situation.

Padhi advised having the necessary arrangement with local telecom service providers for sending alert/ warning messages through SMS to all cellphone consumers of the areas likely to be affected.

Special Relief Commissioner Bishnupada Sethi indicated that the satellite phones provided to the Collectors, ODRAF units and key state-level officers are being test operated at regular intervals to ensure that the sets are in operational condition. Toll-free telephone numbers 1070 and 1077 in State and District EOCs respectively are functional. Temporary Police VHFs will be installed in remote/ inaccessible areas prone to floods before the onset of monsoon, said the official.

The Police Communication Network will also be used in disaster situations if required. Apart from all these, Social Media (Facebook, Twitter & Whatsapp) is used for disaster response related communications.

There are 20 ODRAF units set up across the state which are ready for deployment for rescue and relief operation during flood and cyclone. There are 317 Fire Stations equipped with required search & rescue equipment and trained manpower to take up search & rescue.

Besides, 11 teams, each consisting of 35 personnel, of NDRF 3rd Battalion at Mundali are ready for deployment. Familiarization Exercises (FAMEX) are being conducted by NDRF, ODRAF and Fire Services in peacetime.

As many as 300 power boats under State Port Engineering Organisation of Special Relief Commissioner are in readiness for use in case of flooding for relief management.

Mock drill on the management of flood and cyclone will be held on 19th of June 2018 in all the districts. Such drill will also be conducted in all 879 multipurpose cyclone/ flood shelters in the State during which community volunteers will take part in disaster management drills.

Preparedness by all the concerned departments was reviewed in the meeting. Health Department was advised to take necessary steps for shifting of the pregnant women in flood-prone areas to MAA Gruha immediately on receipt of flood warnings.

It was decided to make a proper inventory of rescue and relief equipment available both in government and private sector and keep it handy for use in emergency situations.