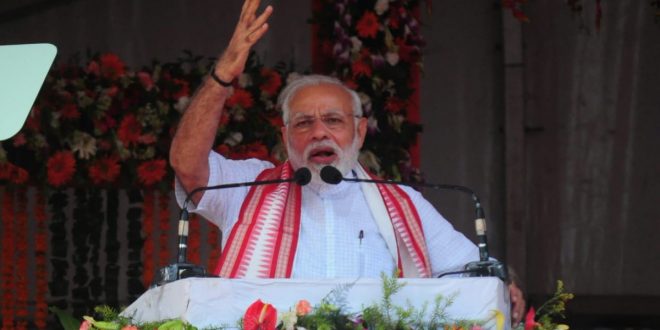 Addressing a gathering at Baliyatra ground here on completion of four years in power at the Centre, he said the Odisha government is responsible for issues pertaining to Mahanadi river water.

“The state government is not carrying out its responsibilities properly. In the state Assembly, the state government has accepted that more than 50% of Mahanadi water drains into the Bay of Bengal. The Centre tried to resolve the issue, but the Odisha government did not cooperate,” said the Prime Minister.

He said the state government failed to develop a system to use the Mahanadi water for irrigation and other purposes.

He said the Centre had tried to resolve the Mahanadi problems but the Odisha government didn’t come forward.

“Water Resources Minister Nitin Gadkari had written to Odisha Chief Minister to resolve the water sharing dispute. Besides, our proposal to constitute a tribunal was also discarded,” said Modi.

Modi said that the people of Odisha want to know why the Lower Indravati irrigation project, which started 20 years ago, was delayed for so long.

“Why the state government has delayed various irrigation projects and pushed up the project costs by 4 to 5 times? Why have the farmers of Odisha been left in the lurch? However, the Central government has taken the responsibility of bringing a change for farmers and ensuring water reaches their farmland,” Modi said.