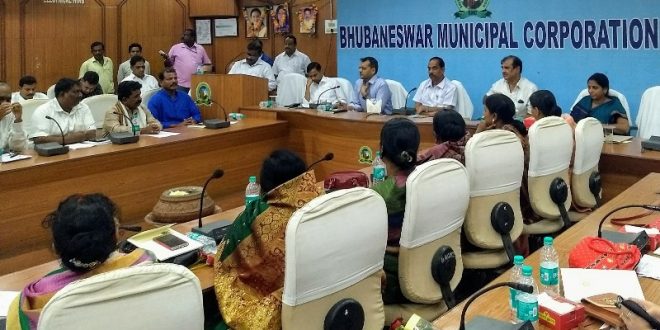 Bhubaneswar: Bhubaneswar Municipal Corporation (BMC) on Friday decided to penalise and collect a fine of Rs 50 per offence if a person is found defecating in the open, by the local Ward Sanitation Committee or the Self-Help Groups.

This step will work as a catalyst to make the city open defecation free (ODF) and the legislation by the urban local body is also a prerequisite in this regard, for the ODF tag.

BMC Mayor Ananta Narayan Jena also announced that in order to make people aware about the new legislation on the collection of penalty, awareness camps will also be organised across the city to keep the city clean.

While the proposal for collection of fine from persons defecating in the open was unanimously passed by the Corporation, the Corporators also expressed their strong view against the mushrooming growth of Kalyan Mandaps (community halls) across the city, which ultimately create traffic jam and additional burden on the civic body in lifting the solid waste, they generate by holding various functions and social gatherings.

The Corporation also decided to make a survey of all Kalyan Mandaps across the State Capital through the Planning Wing of BMC in association with all the Zonal Deputy Commissioners, Corporators and officials.

The nature of plan approval given to a Kalyan Mandap (whether residential or commercial) and the violations made through parking and encroachment irregularities would be taken into consideration.

Seven prominent water bodies inside BMC boundary will be restored with an investment plan of Rs 20 crore.

While a DPR has already been prepared by an agency Multi Mantach, Odisha Urban Infrastructure Development Fund (OUIDF) will extend financial assistance in this regard.

The project will be funded through a grant, loan and share from BMC in the cost-sharing pattern of 45:45:10.

Tourism Minister Ashok Chandra Panda asked the corporators to furnish the list of temples in their locality so that Rs 5 lakh per monument would be granted for their upkeep.

He, however, clarified that the temples should be under public use and do not belong to private ownership.

Municipal Commissioner Dr Krishan Kumar in his speech briefed about the progress of various projects under the Smart City Proposal.

He explained at length about the Bhubaneswar Operations Centre, which would be the central command control centre for all city-based operations.

He also spoke about the revamp in the pan-city public transport scenario, which would see radical changes before the coming World Cup Hockey.