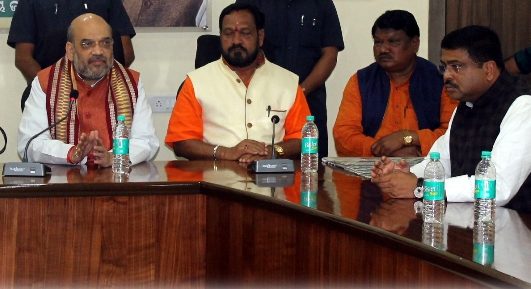 Bhubaneswar: BJP national president Amit Shah will visit Odisha on Sunday to hold meetings with party cadre ahead of the 2019 elections.

During his one-day visit, Shah will hold several meetings that include meeting with the elected representatives including from panchayat level, addressing the cadre, and finally a meeting with the social media volunteers and influencers.

The BJP president will visit the Exhibition ground here to meet the panchayat representatives of three parliamentary segments-Bhubaneswar, Puri and Cuttack.

As Odisha will witness both general and Assembly polls next year, the saffron party is leaving no stone unturned to mobilise the cadre starting from the grassroots level to dethrone Naveen Patnaik government, which has been in power since last 18 years in Odisha.

BJP feels that it can improve its tally riding on the popularity of Prime Minister Narendra Modi and incumbency against the present BJD government.

The BJP’s focus on Odisha was also visible from the fact that Narendra Modi had chosen Cuttack to address his government’s fourth anniversary rally on May 26. Besides, Shah is making frequent visits to the state.