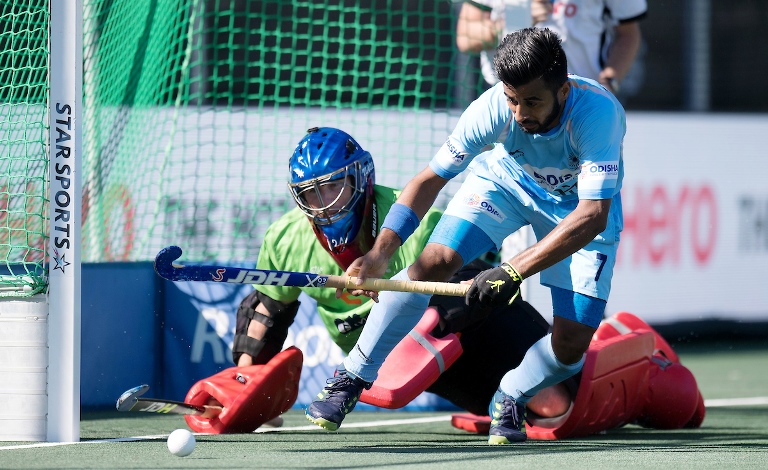 Breda (Netherlands): World number one Australia pushed India to yet another heart-breaking loss in the final of the Rabobank Men’s Hockey Champions Trophy Breda 2018 as they won the final 3-1 in a tense shootout after Indian team held the defending champions to 1-1 in the regulation time.

Aran Zalewski, Daniel Beale and Jeremy Edwards scored for the winning team in the shootout while Manpreet Singh tucked one past Tyler Lovell for India. In the regulation time, it was Vivek Sagar Prasad (42′) who scored the equaliser for India after a 0-1 setback when Blake Govers scored off a PC in the 24th minute earlier in the match.

Although the Defending Champions made a good start to the Final match, India quickly took control with better ball possession (over 60 per cent) coupled with eight circle entries, two shots on goal and two PCs in the first quarter.

While India could not capitalise on the PC opportunities, they missed a golden chance to score a field goal towards the end of the first quarter when Surender Kumar made a beautiful pass to Dilpreet Singh who then crossed it over to Sunil but the striker pulled the ball onto his own feet, thus could not score.

Australia, on the other hand, were extremely quick on their counters and waited for their chances. Though India made their third PC, minutes into the second quarter, Australia did well to defend Harmanpreet’s flick.

An infringement in Australia’s circle saw India concede the first PC of the match and the chance was brilliantly capitalised by Blake Govers as he powered it through. Though Sreejesh got his left glove on the ball, it bounced off into the net giving Australia a critical 1-0 lead in the 24th minute.

Though India had dominated major part of the first and second quarters, they had nothing to show on the scoreboard.

Looking for that elusive equaliser, in the 38th minute India appealed for a dangerous ball inside the striking circle but their fifth PC was not only denied, they also ended up losing the video referral at a very crucial juncture of the match.

But their moment of reckoning came in the 42nd minute, Vivek Sagar Prasad hammered a cross by Chinglensana Singh. The equaliser had finally come after 17 circle entries.

This was India’s seventh attempt on goal. Soon after, Mandeep Singh had a fabulous shot on goal with seconds remaining for the third hooter, but Tyler Lovell was exceptional in his save to keep India from taking a lead.

With the scores reading 1-1, one couldn’t help but wonder if the Final would end up in a shootout similar to the 2016 edition in London. India pushed up front with forwards Lalit Upadhyay and Mandeep Singh, yet three more shots on goals went amiss.

While the team’s defence stood out, another great chance was missed with Sunil making a strong foray into the circle but Manpreet Singh on the far post could not make this one count. Seconds ticking away, neither team could manage a lead thus resulting in yet another shootout.