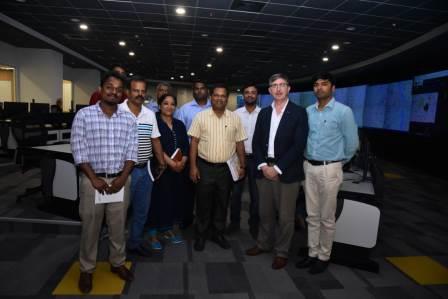 This visit is part of the research being done by Dr Ali Al Azzawi exploring certain projects in cities across the globe that contribute to the happiness of the citizens, especially children of the city, for inclusion in an upcoming report he will be submitting to the smart city sub-council under the United Nations.

He has been visiting several smart cities across the globe for preparing this report and observing the difference of context in project implementation in different parts of the world.

During his visit to BSCL office, Dr Ali was taken through a presentation on various components of child-friendly smart Bhubaneswar plan and some of the already implanted as well as planned projects in this regard by Urban Planners of Bhubaneswar Urban Knowledge Centre (BUKC), an extension of Bhubaneswar Development Authority (BDA).

In an elaborate presentation, BUKC Urban Planner Vipul Mahule explained about how BSCL and BUKC are working closely to incorporate child-friendly design aspect into all public facilities and infrastructure being designed and implemented in Bhubaneswar.

While appreciating the concept of interactive play spaces adopted in the development of the parks, he appreciated that the authorities and BUKC team conducted multiple consultations as well as hands-on co-designing sessions with the children in the process of finalizing the design of these parks.

This was followed by visit to the Shanti Nagar slum in Kharvel Nagar area, wherein he interacted with young peer leaders from the slum, who have been trained under socially smart Bhubaneswar initiative, being jointly implemented by BSCL and Bhubaneswar Municipal Corporation in collaboration with United Nations Population Fund (UNFPA) and implementing partner Humara Bachpan Trust.