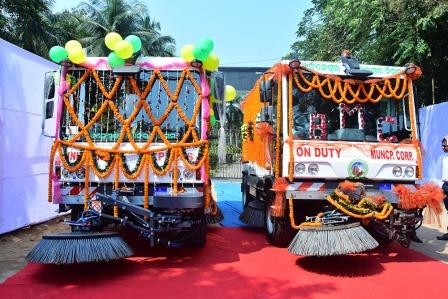 He also laid the foundation stone for 60 smart, pre-fabricated stainless steel toilets, to be set up across 30 locations in the city.

The launching of the ultra-modern mechanical sweeping machine on Gandhi Jayanti holds the significance as Mahatma was perhaps the only political leader in India, who had emphasised on cleanliness much before the struggle for Independence.

The State Government has also announced the celebration of the 150th birth anniversary of the colossal leader in a grand way.

BMC Mayor Ananta Narayan Jena said, “New smart stainless steel pre-fabricated toilets would be the change makers in the city and especially during the World Cup Hockey they would help the people in a great way.”

BMC Commissioner Dr Krishan Kumar said, “The mechanical sweeping will ensure better air quality across the city along the 80 km corridor. The machines can collect dust type of Particulate Matter (PM) from size 2.5 to 10.”

BMC through two agencies will implement mechanical sweeping on an identified road network across the city from October 2. Through tender the process the civic body has selected two agencies for a contract period of three years.

The two agencies will do a pre-operational free trial run from October 2nd to October 9th. Once the agencies complete the free trial run, they will start their operations.