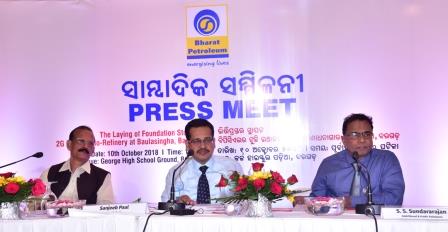 Ethanol plant to come up at Bargarh

Bhubaneswar: The foundation stone for the second generation (2G) Ethanol Bio-Refinery of Bharat Petroleum Corporation Limited will be laid in Odisha’s Bargarh district on October 10.

The Bio-Refinery will have a capacity to produce three crore litres of fuel grade Ethanol annually using rice straw as feedstock and the ethanol produced from the plant will be blended with petrol, said Sanjeev Paul, Chief General Manager, Biofuels.

The cost of the Bargarh ethanol plant is around Rs 1000 crore, he added.

Debashis Palit, State Head, Retail (Odisha & Jharkhand) said the state government has already handed over 58 acres land for the project while the Centre has already given environmental clearance.

The work on the Bargarh ethanol plant will be completed within two years, said Palit.

The first pilot project of the state is aimed at making the country self-sufficient in terms of energy. The crop residue such as straw and other biomass will be utilised to produce ethanol in the plant.

Biofuels have assumed importance recently due to the growing energy security needs and environmental concerns. Several countries have put forth different mechanism and incentives to encourage use of biofuels to suite their domestic requirements.

The Bargarh Bio-Refinery will utilize about two Lakh tons of Rice straw annually as feedstock which will be sourced from nearby locations like Bhatli, Ambabhona, Attabira, Sohela, Burla, Lakhanpur etc.

The Bio-Refineries will contribute to the cleaner environment due to the usage of waste Rice Straw for Ethanol production thereby reducing waste straw burning in fields. Blending of Ethanol in Petrol will also reduce Green House Gas (GHG) emissions as compared to fossil fuels. The plant is based on Zero-liquid discharge plant (ZLD) technology where all the water will be recycled back into the plant.

In addition to a cleaner environment, this project will also help improve the socio-economic conditions of the farmers due to additional income from supply of waste Rice straw to the Bio-Refinery.

Also, this will generate employment for approx.1200 persons (both direct & indirect) during construction, operation of plant & supply chain management of biomass thus boosting the Infrastructural development in the area and overall improvement in livelihood.