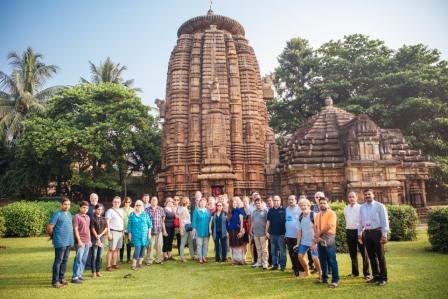 The tourists enjoyed the sight of the old monuments and also came to knew about the traditional offerings to the forefathers on the banks of holy lake Bindusagar.

Tour operator from Stockholm Cecelia Purits of Samuel Travels summed up her three days’ stay as a memorable one as she has visited the state on earlier occasions as well.

She said, “Odisha is India’s well-kept secret. I hope you all should work towards keeping the secret intact forever.”

Michel Binder from Austria, from Omega Tour, said, “The capital city should be connected with more international flights. The e-visa system should also start at the airport to make the travel easier and smoother.”

Michel, who travelled to Puri and some tribal heartland, said the state has got the immense potential to attract foreign tourists.

Rita Erdosi of Seasons Tour from Hungary described her visit meaningful and said that the state’s tourism treasure has attracted her like anything.

Aonjira Somjai from Bangkok, Thailand said, “Odisha has got a nice potential to attract tourists from East Asian nations due to its deep tooted Buddhist connections.”