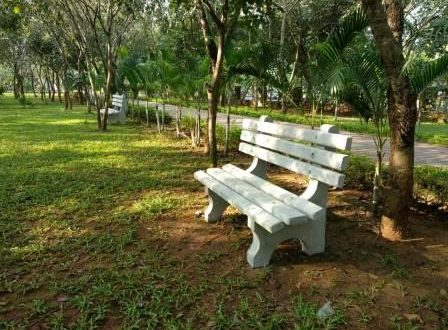 Though pre-fabricated, they are assembled at the site and being in concrete are very strong, durable and theft-resistant in nature. These concrete objects would also be weather resistant and could withstand all types of environmental conditions.

Currently, these are introduced in Madhusudan Das Park, Indira Gandhi Park and Biju Patnaik Park. In near future, Guru Kelu Charan Mohapatra Park and Shyama Prasad Mukherjee Park will also have them inside their campus.

The pre-fabricated park/street furniture will also be incorporated in the lighter quicker and cheaper (LQC) projects to beautify the city before the World Cup Hockey.

These structures would also be part of some patches along the 40 km-long priority corridor across the city, which would be made beautified with various plants and planter boxes.

The special plantation activity will include planting of flower beds, grass, lawns, shrubs, hedgerows and trees. Besides, there will be planter boxes and hanging planters along with tree guards and railings.

However, the project proponent will be encouraged to use further innovations when developing its proposal and suggest alternatives that are beneficial for the project.

The project includes planting, watering, pruning, watch and ward along with other maintenance of landscape works for four years. The project also provisions for engagement of dedicated gardening staff in adequate numbers along all stretches for proper upkeep and maintenance.