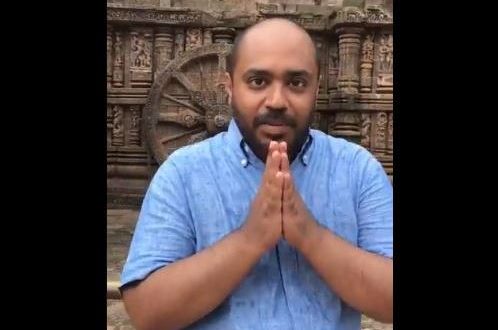 Bhubaneswar: Delhi-based Journalist Abhijit Iyer Mitra has written an apology for his derogatory remarks on Sun Temple and undermining the dignity of the rich culture of the state.

Iyer was earlier summoned to appear before the House Committee headed by leader of opposition Narasingh Mishra on Thursday. He, however, skipped appearance before the house panel for an inquiry into the alleged breach of privilege.

In a letter to the Speaker Niranjan Pujari, Iyer sought apology for not deposing before the panel on the scheduled date as per summon.

Meanwhile, the members of the committee attended the meeting this morning as Iyer was expected to be deposed to put his stand clear on the allegations levelled against him.

As he did not appear today, the committee has asked to appear him on October 23.

Notably, the Supreme Court on October 4 had dismissed Iyer’s bail petition to grant relief over his alleged remarks that hurt religious sentiments of people of Odisha.

On September 16, Abhijit had posted a video on Twitter making remarks on the Sun Temple in Konark while being present at the spot.