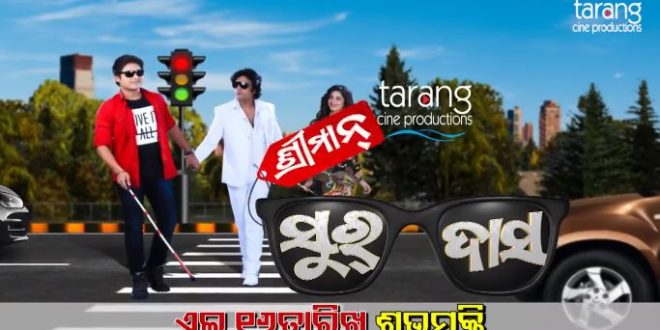 Bhubaneswar: Babushan and Bhumika are all set to entertain audiences this Dussehra with a power-packed performance in their upcoming Odia film Shreeman Surdas.

The Odia film Shreeman Surdas will be released this Dussehra on October 16.

Babushan Mohanty will be seen playing the character of a visually impaired singer for the first time. Bhoomika Das will be seen opposite Babushan in the movie produced under the banner of Tarang Cine Productions.

Both the actors were also seen romancing in the Odia film ‘Hero No 1’ last Dussehra under the same banner.

Besides Babushan and Bhumika, Buddhaditya Mohanty is all set to surprise the audiences with an interesting character in the film Shreeman Surdas while veteran actor Mihir Das will be seen in a negative role.

Aparajita and Asrumochan will also be seen in the movie.

The film is directed by Ashok Pati while lyricist Nirmal Nayak and music director Abhijeet Majumdar have teamed up to provide beautiful songs.

“I am excited for the big-budget movie of Tarang Cine Productions. It will be a new challenge as I have never played such a character before. I am happy with the script as well as the entire team,” said Babusan.

Ashok Pati informed that it is people’s love that has again brought the old team back for the project.