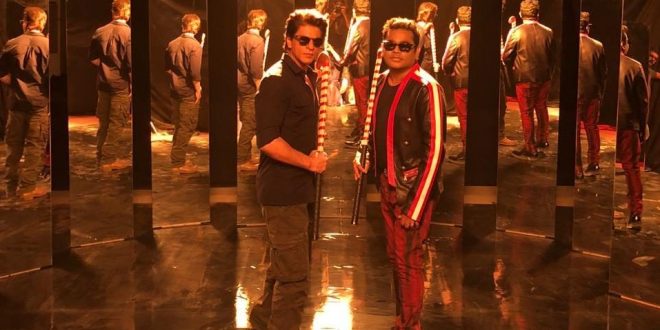 The music video will showcase the new India and have visual elements from the contemporary and urbane to the grassroots India even, as it’s the core of hockey and Team India.

The electric video together with the HWC Song is sure to inspire every Indian to get behind Hockey, as the Odisha Hockey Men’s World Cup Bhubaneswar 2018 kickstarts in a month’s time.

The song and video are slated to release at the end of the month when Team India returns from the Asian Champions Trophy in Muscat.

Cheering the Men in Blue to get the cup back home, SRK in his tweet also termed hockey, “the pride of India” and urged everyone to get behind the Team India and support to the game.

With SRK & AR Rahman combining forces to inspire one and all, it is certain that the sport will attract a larger fan base, as India takes on rest of the world at Bhubaneswar come November.

For Rahman Jai Hind Hind, Jai India marks a return to directing a music video after the legendary Vande Matram that he directed back in 1997 and his internal brief to the team that comprised lighting genius and celebrated cinematographer, Ravi Varman is for the video to showcase the India that he loves and the India that is, today.

Having composed the tune, it is Rahman who offered his services to direct the music video as his tribute to his motherland: India.

The Opening Ceremony of the HWC 2018 is slated for 27th November 2018 and will showcase both the maestros of cinema and music, Mr Khan and Mr Rahman, respectively live.

World Cup is scheduled to set the stage from November 28 to December 16 at the Kalinga Stadium in Bhubaneswar. A total of sixteen nations will be participating in the tournament wherein each team will play three matches during the league stage over the span of twelve days before four cross-over matches take place on 10th and 11th December 2018.