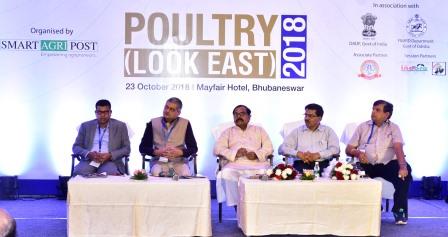 Bhubaneswar: Odisha is set to be self-sufficient in poultry and egg production, said Finance Minister Shashibhusan Behera on Tuesday.

He felicitated the poultry entrepreneurs for their excellent contribution and innovation in poultry sector in an event organised by Smart Agri Post.

The conference is an attempt by private stakeholders in association with government organisations.

Throughout the day, several intellectuals brainstormed on issues and challenges facing the poultry industry, emerging poultry feed and health management, the scope of export and processing of poultry products.

Pravash Pradhan, Editor, Smart Agri Post said, “The objective behind organising such type of workshop was to identify the issues and challenges and develop strategies for sustainable poultry production, to address the gap for input channelization and cost-effective small-scale poultry production.”

“We are feeling proud to have such programmes in Odisha seeing the enthusiasm and overwhelming response of various poultry entrepreneurs and budding entrepreneurs of this state who have made this programme a successful one with their presence,” he said.

India is now the world’s 3rd largest egg producer and the 4th largest producer of broilers. India is one of the few countries in the world that has put into place a sustained Specific Pathogen Free (SPF) egg production project.