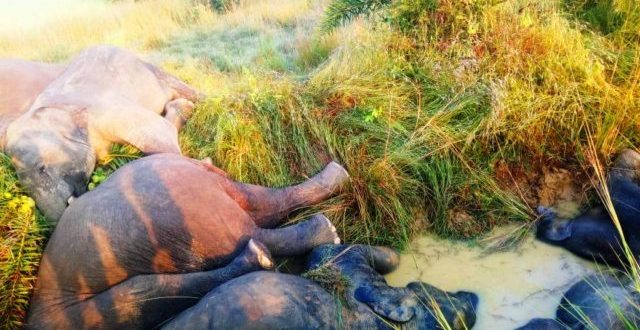 Dhenkanal: As many as seven elephants were electrocuted after coming in contact with a live wire at Kamalanga village under Sadar Forest Range in Odisha’s Dhenkanal district, said a forest official on Saturday.

The locals spotted the carcasses of the elephants on Saturday morning. The pachyderms died after coming in contact of sagging lines on Friday night.

A herd of elephants had wandered close to human habitation in search of food last night when the incident took place. The pachyderms came in contact with low-hanging live 11KV wires that were laid by the railway department for track construction work.

Meanwhile, the forest department blamed the energy department for the death of the seven elephants in Dhenkanal.

“Due to non-rectification of sagging lines and non-cabling of transmission lines, the accident has occurred claiming the lives of seven elephants in Meramundali section of Dhenkanal range of Dhenkanal division,” said the PCCF in a press release.

Dhenkanal DFO said several letters have been written to CESU for rectification of the sagging electricity lines in the region but no action has been taken in this regard.

Action will be taken against persons to be found responsible for the incident, he added.

Energy secretary Hemant Sharma said an inquiry team has been sent to the spot and action would be taken after getting their report.