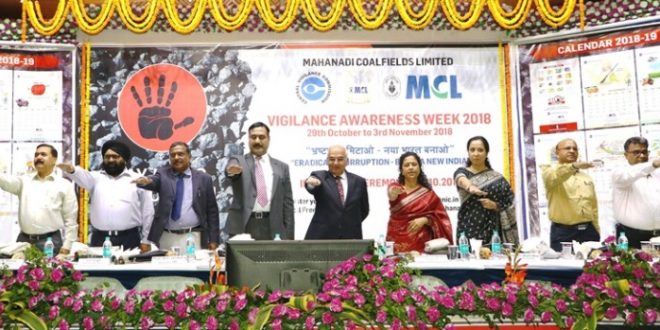 Sambalpur: Corruption in the society can effectively be reduced by following a timeline in personal and work life, said Justice Satish Kumar Agnihotri, former Chief Justice of Sikkim High Court.

“Over the course of 50 years, there has been a big change. Much conduct which was legal a generation ago is now termed as corrupt. Yesterday’s honest theft is today’s illegal conflict of interest.

“A gift was not bribery at one point of time, now in such gifts, there is intent to corruption,” said Justice, sharing his experiences in the Indian context as a keynote speaker and chief guest on the occasion.

Terming corruption as a multi-faceted and global phenomenon, Justice Agnihotri said, “If you follow a timeline, then half of the corruption is over.”

It would not possible to eradicate corruption completely from the society, but following a timeline would certainly reduce the possibilities of its occurrence, the Justice remarked.

Chief Vigilance Officer Munawar Khursheed, IRPF, gave an account of vigilance activities and achievement of the company in ensuring transparent work culture. He appreciated the role of the Coal India’s Chairman, MCL’s CMD and Directors for their proactive actions in creating a transparent work environment.

LN Mishra, Director (Personnel) and OP Singh, Director (Technical/Projects & Planning) of MCL also spoke on the occasion, which was attended by a large number of management students from IIM Sambalpur, adding a unique feature to the event.

The dignitaries also released a wall calendar, having cartoons as a mode of communication to fight against corruption. A vigilance bulletin and reprint of vigilance manual were also released at the inaugural ceremony, which was conducted by OP Mishra.

Meanwhile, Sushmita Sahai, Deputy Manager (Personnel/EE) administered the Vigilance Pledge to all the participants at the inaugural ceremony.