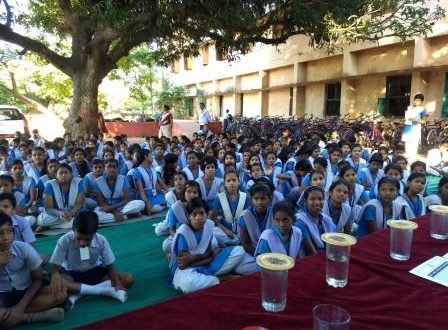 BMC creates awareness among school kids against plastic use

Bhubaneswar: While the enforcement against the use of plastic continued in the city, the BMC team comprising the sanitation and communication experts organised an awareness campaign at Badagada High School and informed the kids about the ill effects of polythene and plastics.

Speaking on the various ill effects on digestive and physiological processes, Das advised students not to use such food and always stay away from food packed in polythene and low-grade plastics.

Students were urged by the BMC outreach team to create awareness not only in their own houses, but take the step further to aware neighbours and people of the locality.

Grievance Redressal Officer Ramesh Chandra Swain, through a song, spoke about the menace.

The team also spoke about the Swachha Survekshan Survey 2019 as the civic body is competing with around 5,000 towns and cities across India.

In order to keep the city clean, speak about the cleanliness and having a proactive attitude towards keeping city’s overall image in cleanliness the kids were told to be torchbearers as already a group of kids from BTCD area in the past have contributed much towards controlling open defecation.

Communication Expert Nihar Ranjan Patra, E-Governance executive Hemanta Pradhan, Social Media Expert Sambit Mohapatra spoke about how to lodge a complaint through the toll-free number 1800 345 0061 about cleanliness issues across the city and localities near the school, in particular.

School headmistress Basanti Panda promised to take initiative through the school children and staff in nearby areas so as to minimise polythene use and plastics.

Continuing its action against use of plastic and polythene, the North Zone of BMC seized 20 kg of polythene and collected a fine of Rs 7,000. The special squad of the North Zone raided 62 shops today during the activity.

The enforcement was carried out under the leadership of its Zonal Deputy Commissioner Pramod Kumar Prusty.

The South East Zone seized 14 kg of polythene as per enforcement inspector PK Jena. However, due to an eviction drive more collection could not be possible by the team.

Similarly the South West Zone squad was also pre-occupied with an eviction near Bhimpur, airport area, resulting in no enforcement for plastic ban.