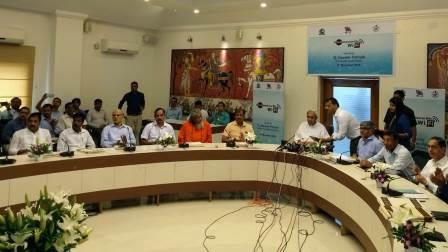 On day one, 100 hotspots with 275 Access Points (APs) went live. The hotspots are located on major locations between KIIT Square to Governor House, Acharya Vihar to AG Square, Sishu Bhawan to Vani Vihar and Nalco Square to Acharya Vihar.

While one Wi-Fi hotspot would be able to handle as many as 150 users at a given point of time, the Internet speed will be available at 2 megabytes per second (MBPS). Access to 250 MB of data will be free for any user on a given day.

Speaking on the occasion, the Chief Minister said, “I am very happy that the BhubaneswarMe Wi-Fi project will become the first ever project in the country with a unique capability to cover the entire city. I hope all citizens; especially the younger generation will find the facility very useful.”

He further added that as part of the project there would not be any charge on data usage for citizens when they access government services through this network.

“This will help the State Government to bridge the digital divide,” he observed.

According to sources, the Phase-I launching of Wi-Fi network with 100 hotspots would be followed by 100 locations in the Phase-II it would add up later and there would be 518 hotspots across the city to complete the City Wide Wi-Fi Network. With all three phases, the city will have 1,800 APs.

The Wi-Fi network uses a wireless band of 2.4 GHz and 5 GHz available for use, based on the handset capabilities of the user. The wireless architecture and plan is designed to comply with all the regulations and principles of Telecom Regulatory Authority of India and Department of Telecommunication.

In the first phase, a user can get free Wi-Fi access for 250 MB data daily. After the consumption of data, he/she has to log in and choose a payment plan for subsequent use. The BhubaneswarMe Wi-Fi will provide very low-cost top-up plans for the users.

However, it would be pertinent here to note that not every inch of the 80-km priority road network will be ready with the Wi-Fi, but one should be within 100, 200 or 300 metres reach of the access point to log in to the network.

For example, in a park, if there are three to four access points, the entire park would be ready to serve Wi-Fi access. Similarly, in a government office, there could be three access points so that people can access the network.

The City Wi-Fi project is part of the Smart Solutions of BSCL and also part of the Master System Integrator (MSI), which would be executed by Honeywell, a company with IT expertise. The entire MSI will also include the Bhubaneswar Operations Centre, Intelligent Traffic Signal and Control System and Common Payment Card System so that all the IT-based systems and infrastructure across the Smart City would function in sync.