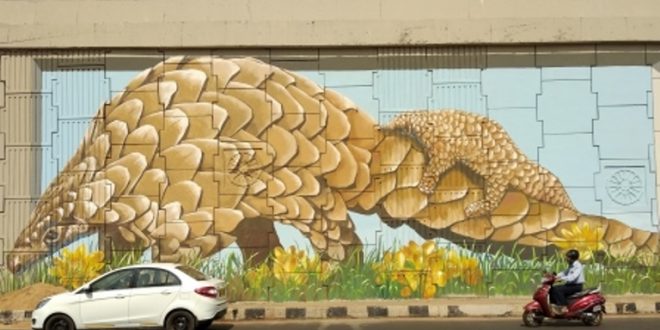 Bhubaneswar: The Temple City emerging as the sports capital of India is set to make its mark in the country as the “Mural Capital” with some world class murals by some of the finest contemporary 3D street artists in the world.

Bakul Foundation had played a major role in the murals and street art scene of Bhubaneswar and got the most prominent murals made for BMC in 2017 with the flyovers at Rajmahal, Acharya Vihar and Jayadev Vihar in addition to painting on the platform of the railway station and public toilets.

It proposed to BMC to bring in the best street artists of the world to transform the cityscape with public art.

With the enthusiastic support of BMC, Tracy Lee Stum, who had visited Bhubaneswar twice earlier as an ‘Arts Ambassador’ of the US Government and conducted workshops at Bakul, agreed to curate a 3D mural project with other celebrated artists, all currently based in the USA.

BMC offered them a huge canvas of the sidewalls of flyovers at the most prominent locations in the city such as Vani Vihar, Acharya Vihar, Jayadev Vihar and ID Market turning.

Within a span of 15 days, Tracy herself created one of her biggest murals at 110 ft into 24 ft titled, “Over the rainbow” and that celebrated the city’s development into a child-friendly smart city and presents huge figures of happy children on swings and play.

It appears as if the flyover wall has opened up and we see the children playing with a rainbow in the backdrop, which curls back as a slide as well.

Anat Ronen, originally from Israel, painted another huge mural (70 ft into 28 ft) of the endangered pangolin at Acharya Vihar Square and it looks like a huge dinosaur towering over the tiny vehicles to those uninitiated to wildlife.

It again creates a 3D illusion as it appears as if the pangolin is stepping out of the flyover. Very aptly, it has been located close to the Natural History Museum because of which the pillars of the Acharya Vihar flyover had paintings of birds.

At the Jayadev Vihar flyover, which is close to Kalinga Stadium, where the Hockey World Cup will be played, predictably the theme is hockey in the 3D mural by Julio Jimenez, originally from Mexico.

But, he has made the inside walls look as if one is actually at the hockey stadium with a game being played and the field seems to extend till the road.

At ID Market turning, Zee Schindler, originally from Brazil, took inspiration from the colourful Indian trucks and presented an illusion of trucks breaking through the flyover wall onto the road.

In another 3D illusion, she is presenting huge eco- light bulbs plugged into the flyover wall but reflecting the ecological concerns through images of water conservation, wind energy etc.

These world-class 3D murals make Bhubaneswar stand out among all other cities in the country as none of them boasts of such interesting site-specific 3D illusions by masters.

And this is in the most prominent spaces in the city. No one in the city can ignore these huge and stunning murals, unlike Delhi where the Street Art Project (START) has been confined mostly to the bylanes of Lodi Colony.

This has been complemented by the profusion of contemporary and traditional murals on the pillars of flyovers and on boundary walls. This is probably the first time in the country that a city administration has taken such an ambitious step to create a character for the city through murals.

It can be mentioned here that Odisha had a rich tradition of mural painting on walls and Raghurajpur was one of the centres but that has been dying though other art forms such as “patachitra” have found a new lease of life as they have become popular products that can be purchased and gifted or displayed.

Murals on public walls had become widespread in Bhubaneswar since 2007 through efforts of BMC and got rebirth with BMC in 2017. While the paintings earlier focused on traditional elements such as crafts and tribal motifs, the murals since 2017 followed a modern and contemporary style reflecting the growing aspirations of a smart city.