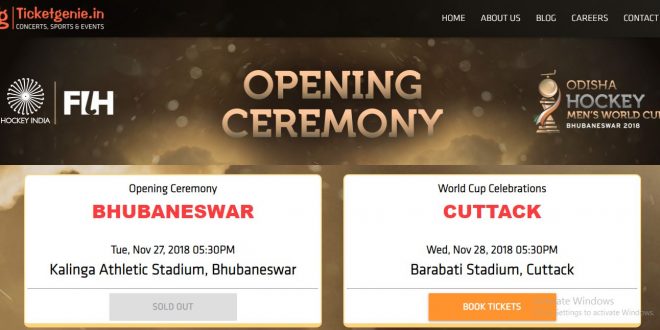 Bhubaneswar: Thousands of hockey fans are disappointed as the Ticket Genie website for the opening ceremony tickets of Odisha Hockey Men’s World Cup crashed as soon as it went live at 12 pm on Tuesday.

The official website – http://ticketgenie.in/event/hwc-opening-ceremony – for online tickets for Men’s Hockey World Cup opening ceremony in Bhubaneswar and World Cup celebration in Cuttack – was not opening.

Hockey India tweeted, “Your overwhelming response to purchase online tickets for the Opening Ceremony & the World Cup celebration events of the OHMWC Bhubaneswar 2018 from http://www.ticketgenie.in has led to the slowing down of the website. However, there’s good news in store as the website will be restored shortly and you can continue to purchase your online tickets.”

Around 10,500 tickets for Kalinga Stadium on November 27 and around 30,000 tickets for Barabati Stadium the following day are being sold online.

Music maestro A R Rahman will be performing in Bhubaneswar and Cuttack.

Clarifying its stand, the Odisha government said it has no role in the sale of tickets.

“Hockey India is completely responsible for the sale HWC2018 tickets and Odisha government has no role in it. We will take up the matter with Hockey India officials,” said State Sports & Youth Affairs joint secretary, Manoj Padhi.