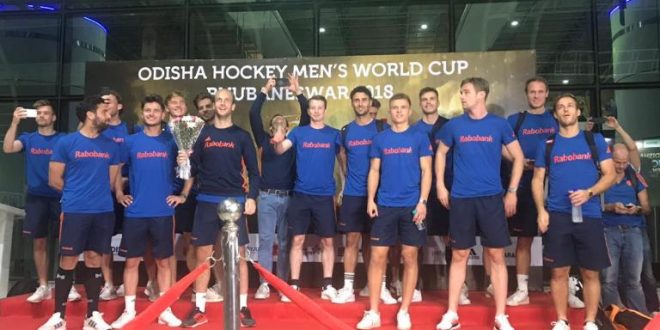 Bhubaneswar: The Netherlands, ranked No.4 in the World, arrived on Saturday for the Odisha Hockey Men’s World Cup.

Grouped in Pool D, being pegged as the ‘Pool of Death’ with heavyweights Germany, Pakistan and Malaysia, the Dutch are looking for tough matches right from the start.

“Bhubaneswar is a great place to be and play hockey in front of an amazing crowd. We are in a tough group with strong teams. We play Malaysia first and we need to make sure we keep our heads down and play our best every match,” asserted Max Caldas, Head Coach of the Netherlands.

Speaking of the team’s excitement to be back in Bhubaneswar, experienced player Billy Baker said, “We have won almost every match we have played this season and we have also had really tough preparations for the tournament. We are aware of the Bhubaneswar crowds who come in large numbers and we want to enjoy playing in front of them and also use their support to feel motivated.”

The Netherlands begin their campaign on 1 December 2018.

World No.3 Belgium too arrived few minutes after their nemesis the Netherlands and shared their anticipation to play at the iconic Kalinga Stadium again.

“We are arriving after three months of solid preparations. We pretty much trained full time and the preparations were heavy. The guys are really fit and sharp. We are excited to get going,” said Belgium Skipper Thomas Briels.

Belgium are grouped with hosts India, Canada and South Africa in Pool B and begin their campaign against Canada on 28 November 2018.

Meanwhile, England and New Zealand too arrived late Friday night and were already on the pitch Saturday to make get a feel of the newly-laid turf at the Stadium.