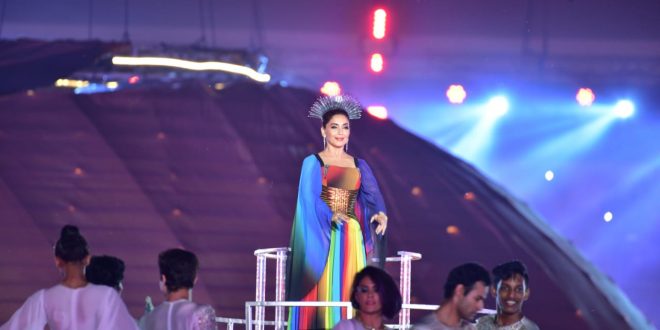 Possessing a level of sophistication and execution rarely witnessed, the event created by Nupur Mahajan delivered strong performances through its engaging choreography, captivating narrative and most importantly its message of ‘oneness’.

With the Odisha Men’s Hockey World Cup (HWC) a day away, the innovative concept enthralled audiences with powerhouse contributions from the likes of A R Rahman, Shahrukh Khan, Madhuri Dixit and many more.

The event was graced by Chief Minister of Odisha, Naveen Patnaik, the teams led by their captains participating at the HWC and other renowned dignitaries.

The opening ceremony showcased first-of-its-kind theatrical production – The Earth Song. Written and directed by Nupur Mahajan to beautifully depict the “Oneness of humanity” which featured Madhuri Dixit as the central character, Mother Earth.

The spectacular fusion dance performances were choreographed by Shiamak Davar; joined by 1100 artists dancing to the tunes created by Ranjit Barot was one the highlights of the evening which left the audience spellbound.

The show opened to the earth cracking and Madhuri Dixit emerging as Mother Earth addressing the world at large as her children, with the opening lines, “I am Earth, Mother Earth, The Mother Goddess. And I have risen today to tell you your tale.” The bilingual script in English and Hindi with snatches of the Bhagavad Gita and philosophy of the Upanishads has been written by Nupur Mahajan.

AR Rahman who brought to life his and Gulzar Saheb’s composition ‘Jai Hind Jai India’ with a live performance, which is the official song and tune of the HWC 2018.

Adding to the grandeur, the Opening Ceremony also saw the culmination of the campaign that encouraged India has given its heart to ‘HeartBeats for Hockey’. Bollywood star, Shahrukh Khan presented over 2.35 crore collected heartbeats to the 16 captains of the Hockey teams participating at the HWC.

Speaking on her role in the theatrical production, Madhuri Dixit said, “I was absolutely elated in playing the central role in The Earth Song as I particularly identified with the theme of oneness and its universal appeal. Mother Earth is a powerful character and to rise as her at a world stage by way of a live performance was a challenge and a unique opportunity. As an artist, I have always enjoyed challenging assignments and being a part of this original dance ballet is certainly an honour for me.”

Speaking of her unique message of oneness at a global stage Nupur Mahajan, Writer and Creator of The Earth Song said, “When there is purity of purpose there is a certain effortlessness and divine flow. And the purpose here was to present my country, India, in her true light to the world. As the daughter of an army man, my very strong sense of identity is as an Indian. I live and believe in One India, and it is this oneness in my DNA that I have extended to the world by way of The Earth Song.”

She further stated this oneness has also been showcased through the 800 children of Odisha performing for the first time on a world stage showcasing a confluence of talent and raw energy.

Speaking on the choreography, Shiamak Davar said, “This is among the most interesting projects that I have choreographed. Such a unique concept had never been created for an opening ceremony of a world level event before, which made this project challenging and interesting for me. I hope we were able to entertain the audiences while passing on a strong message at the same time.”