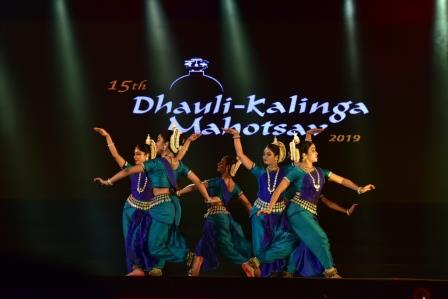 Bhubaneswar: The second evening of the 15th Dhauli-Kalinga Mahotsav showcased a beautiful blend of instrumental, classical and martial dances which regaled a large audience gathered at the foothill of Dhauli.

The first act was Mahodadhi, a musical narrative based on the sacred river that washes feet of Lord Jagannath.

The next Ardhnariswar performance by Srjan displayed some intense facial expression.

The evening concluded with Manipuri Thang-Ta. Thang-Ta is popular term for the ancient Manipuri Martial Art known as HUYEN LALLONG. The performers both male and female initiated the act with a ceremonial bow soon after which the women displayed impressive sword swinging skills. The agility and flexibility of the artists had everyone in awe.