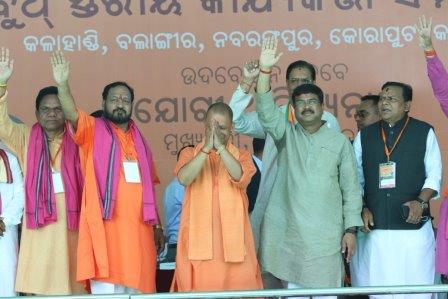 Yogi said the KALIA yojana of the Odisha Government has no stability and is already into corruption from beginning.

Addressing a rally at Bhawanipatna, the UP Chief Minister informed that the PM-Kisan yojana promises an assured income of Rs 6000 annually for farmers.

The first installment of Rs 2,000 will be directly transferred to the accounts of the beneficiaries on February 24, he added.

Adityanath claimed that his government in UP during its two-and-half-year rule constructed 20 lakh houses under Pradhan Mantri Awaas Yojana while the Odisha government has constructed only 17 homes in its 17 year of rule.

Out of those, 6.5 crore LPG connections were given free of cost under the Ujjwala Yojana, he added.