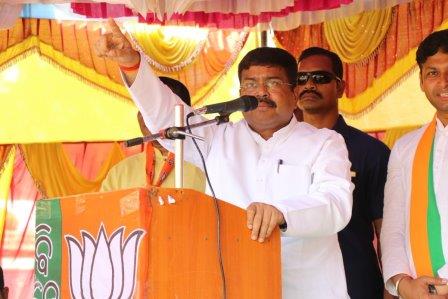 Bhubaneswar: The Odisha unit of the BJP on Sunday launched Vijay Sankalp Abhiyan across the state ahead of the Lok Sabha and Assembly polls.

The campaign was launched in all the 147 Assembly constituencies of the state.

Launching the launched Vijay Sankalp Abhiyan in Angul, Union Petroleum Minister Dharmendra Pradhan attacked the BJD government for failing to provide basic facilities to the people and stalling the developmental projects initiated by the union government.

“Odisha Govt has launched Kalia Scheme, but many farmers are yet to get the benefit of the scheme. They have announced to release the list of the farmers eligible for KALIA assistance at panchayat office, but it is distributed to their party workers,” said Pradhan.

He further said Odisha government has stalled projects worth over Rs 1.36 lakh crore that could have ushered new era of development.

“People have made their mind for a change in Odisha. For the development of Odisha, we need a double engine of BJP in the state and Centre,” he added.

BJP has planned to organise public meetings and hold rallies in all constituencies in a bid to ensure formation of BJP government at Centre and the State, said party general secretary Bhrugu Baxipatra