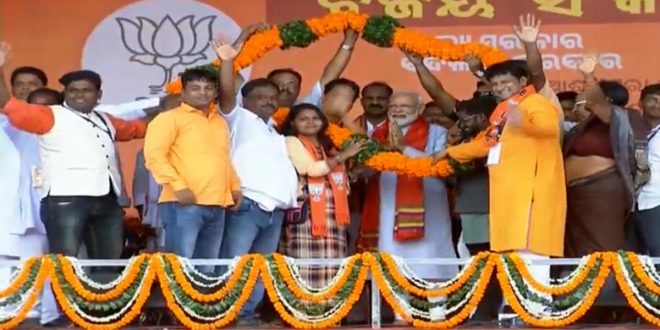 
Kendrapara: Prime Minister Narendra Modi on Tuesday said Naveen Patnaik’s exit is certain in Odisha and a handful of officers cannot save him.

“I want to tell Naveen Babu that you are going and it is certain. A handful of officials cannot save you,” said Modi while addressing an election rally here.

He also said that the Congress and opposition parties are spending sleepless nights as the ‘lahar’ (wave) for the BJP has become a ‘lalkar’ (challenge) for them after the first two phases of elections.

“Response in the first two phases of polls is giving sleepless nights to Opposition parties. Lahar for the BJP has become Lalkar for the Opposition,” he added.

Stating that not a single charge of corruption has surfaced against the BJP-led government in the past five years, he said those who have been levelling false allegations have found themselves in the dock.

Modi also appealed to the people to vote for double engine in the state.