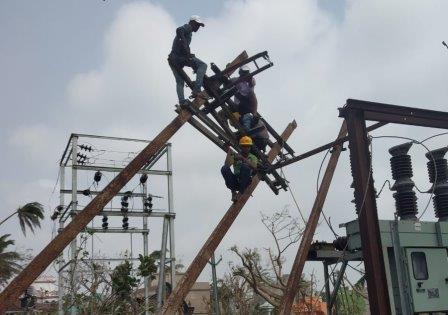 In a letter to Union Home Minister Rajnath Singh, the Chief Minister informed that the power infrastructure in cyclone-affected districts has been extensively damaged.

As per the preliminary report, the extent of damage to the power infrastructure is estimated to the tune of Rs 1160 crore.

“According to the present NDRF norms for the repair of damaged power sector, assistance is given for damaged conductors, poles and transformers up to the level of 11KV only. Even the scale of assistance for the admissible items is highly inadequate,” said the Chief Minister.

“The transmission and distribution companies are not in a position to finance the restoration work. The state government has undertaken the restoration of power infrastructure on a war footing basis from its own resources. However the scale of damage to the power infrastructure is far too extensive to be taken care of by the state government alone,” he said.

Besides the large scale damage to 11kv lines, distribution transformers and low tension (LT) network admissible for repair and restoration under NDRF norms, extensive damage has also been caused to 220 kv and 132 kv towers and transmission lines, grid substations and power transformers.

Odisha govt hikes DA by 3% for its employees