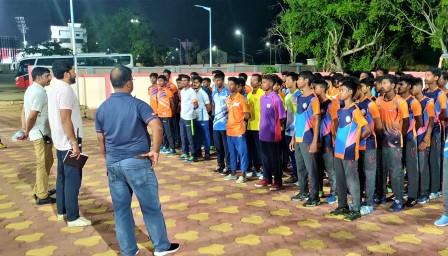 
Bhubaneswar: With the city of Bhubaneswar-where the FIH Men’s Series Finals will be held in June -recovering from damage caused by Cyclone Fani, Hockey India has decided to donate all profits from the sale of match tickets to the Chief Minister’s Relief Fund.

In the build-up to the FIH Men’s Series Finals 2019, the people of Odisha have come out in support of the tournament as 150 volunteers including liaison officers, ball patrols, media coordinators, competitions assistants, etc have signed up to help in the conduct of a successful event.

Hockey India on Monday also organised volunteer orientation to make sure that the people involved were briefed on their roles and responsibilities.

Thanking the volunteers from Odisha for their continued contribution in conducting world-class hockey events in the city of Bhubaneswar, Hockey India President, Mohd Mushtaque Ahmad, said, “Hockey India is extremely grateful to the people of Odisha for supporting the sport of hockey in such a difficult moment as well.

It is fantastic to see the response we have received from the local people, and I would also like to take this opportunity to thank the Odisha State Government for doing exceptional and prompt work in readying the Kalinga Hockey Stadium for the upcoming FIH Men’s Series Finals Bhubaneswar Odisha 2019. I would also like to thank all the volunteers involved in conducting of such events. These young responsible citizens of the state have always come out willingly to help us in organising some of the best hockey tournaments the world has seen.”

“We have been immensely saddened seeing the destruction and loss caused by Cyclone Fani, and to reciprocate the love and support showed by Odisha to the sport of hockey, we are going to give all the proceeds from the match ticket sales to the Chief Minister’s Relief Fund, Odisha. Our aim is to help in rebuilding the state of Odisha through whatever contributions that we can make,” he added.