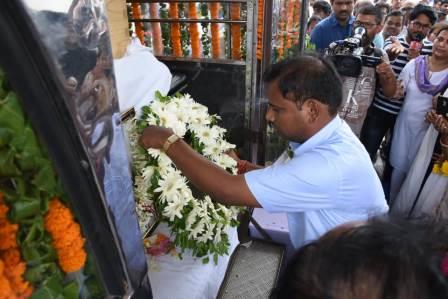 It was accompanied by her brother, Pradeep Dash.

Kalpana, who was 53, had passed away while descending from the summit, on 23rd of May.

The State Government had made all arrangements for the body of Dash to be received at the Biju Patnaik International Airport and taken to Kalinga Stadium Complex, where Minister of Sports and Youth Services, Tusharkanti Behera accompanied by his department officials paid their last respects to the departed soul.

Paying homage, Minister of Sports and Youth Services, Tusharkanti Behera said, “Kalpana Dash was an ace mountaineer who brought fame to the state. She was an achiever who led by example and even in her death she will continue to inspire young aspirants to scale great peaks.

State Government also acknowledges the immense effort of the Indian Embassy in Kathmandu, the search and rescue team of Sherpas and other officials, who undertook this herculean task, braced severe weather conditions and difficult terrain to repatriate the body of Lt. Ms. Dash and bring it back to her family members.”

Media personnel, people from the sporting community, government officials and representatives from social sector, gathered in large numbers at the stadium to pay regards and honor their very own mountaineer.

Kalpana Dash was an Indian lawyer and the state’s first Everester. She first scaled it in 2008 and later trekked several mountains across Europe, South America, North America and Africa.