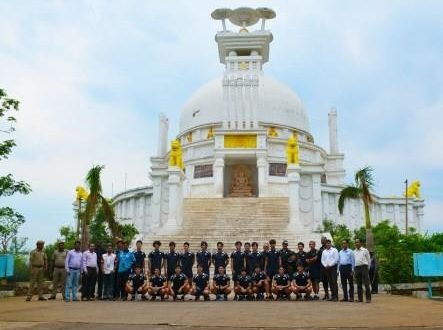 
Bhubaneswar:  Odisha Tourism was delighted to host the Japan hockey team at one of the popular landmarks of Odisha’s Buddhist heritage –  Dhauli International Peace Pagoda (Shanti Stupa), located on the outskirts of Bhubaneswar.

Dhauli Giri Shanti Stupa is a Buddhist structure built jointly in 1972 by the Japan Buddha Sangh and the Kalinga Nippon Buddha Sangh.

The 26-member Japan Hockey Team which is in the city to participate in the FIH Men’s Series Finals was given a warm welcome at the Panthika, an Odisha Tourism Development Corporation (OTDC) property where they were served coconut water procured locally.

The team members went around the Stupa and also visited the temples nearby. They were all quite impressed with the view and the architecture.

The tourists at the venue were surprised to see the players and posed for selfies and pictures with the players. The development of Buddhist Circuit is a priority for the state to attract more foreign tourists to the state.

The Peace Pagoda is constructed atop Dhauli Hills close to the river bank of Daya River. It was built to mark the famous Kalinga War that was fought along the banks of Daya River around 261 BC.

The war was won by emperor Ashoka but the bloodshed that had happened, changed his heart and he converted to Dharma Ashoka (peace lover) from Chanda Ashoka (fierce warrior). Emperor Ashok subsequently turned a Buddhist and he started propagating Buddhism to kingdoms in foreign lands.

On their way down the hill, the team also stopped by the Ashokan rock edicts where Ashoka wrote ‘welfare of the whole world’ in Kalinga Edict VI, depicting his concern about mankind. A rock-cut elephant located above the edicts is considered to be one of the oldest Buddhist sculptures in the State. The Dhauli Hills also provide a bird’s eye view of the entire area, lush green agricultural lands and the river Daya.

Tourism secretary Vishal Dev said, “Odisha is the only Indian state which is promoting the concept of Sports Tourism in the truest sense. We witnessed a record inflow of tourists during the Hockey World Cup last year and this year too, despite the damages caused by Cyclone Fani, we are back in business and what better way to proclaim the same to the world than by welcoming international hockey teams.”

“Hosting international tournaments isn’t only about promoting sports but also promoting tourism and the cultural exchanges which takes place is an experience in itself to cherish for people of all the countries. All players coming to Odisha are like the ‘brand ambassadors’ of tourism for the state and it’s always good to have them take some time out and visit the beautiful places in Odisha,” he added.

Siegfried Aikman, Head Coach, Japan Men’s Hockey Team said, “It was once in a lifetime experience for me and my players to visit the Dhauli temple here in Odisha. The state is truly India’s best-kept secret. I was here during the hockey world cup last here and I know how green and clean the city was.

I am aware of the devastation caused by Cyclone Fani, I mean one can tell from the lost tree cover but it’s great to see the spirit of people of Odisha who are working so hard to rebuild everything.”

Japan will face India in the semi-finals tomorrow at the Kalinga Stadium, Bhubaneswar 7 pm onwards.