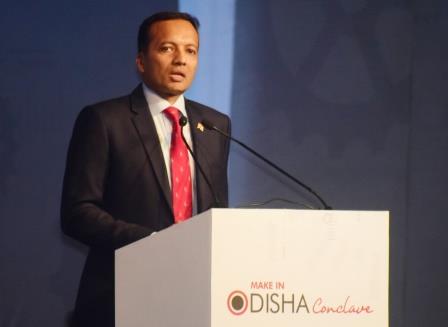 He had meeting with Chief Secretary Asit Kumar Tripathy and Secretaries of Steel & Mines, Industry, Water Resources, other Concerned Secretaries as well as the Development Commissioner of Odisha at the Lok Seva Bhawan (Secretariat) in Bhubaneswar.

Jindal pressed for raw material security to the steel plants as well as for reserving iron ore mines for companies which have set up Steel Plants in Odisha.

“Companies which have invested thousands of crores in steel plants and have created employment in thousands should be given preference in iron ore auction. We have requested for giving iron ore mines first for captive consumption and then for merchant mining,” said Jindal during interaction with media after the meeting.

JSPL has invested 47000 crore rupees in Odisha to set up largest steel plant in the State. It has a very small mines, which is near depleted. It does not have captive Iron Ore and coal mines for the plant.

“Our investment in Odisha needs raw material security to become viable,” he added.

He also informed that JSPL buys about 1 Million Tonne Iron Ore every month in Odisha. “This Makes JSPL the largest buyer of iron ore in the State”.

He also demanded for reduction in Iron Ore Price because of fall in global steel price.

“Steel price has been reduced by about 30%. But Iron ore price has not been reduced accordingly. There is no reduction in price of Coal by Coal India.  The government needs to ensure that people who have invested in the State are taken care of,” Jindal commented.

For the first time in the world, JSPL has set up a coal gasification plant along with a 2 MTPA DRI Plant on the basis of the coal block allotted to it in Angul.

Since the Coal block was cancelled by Supreme Court, Shri Jindal was hopeful that the company would get coal block, if Government of India auctions the coal block for steel companies and Coal Gasification.