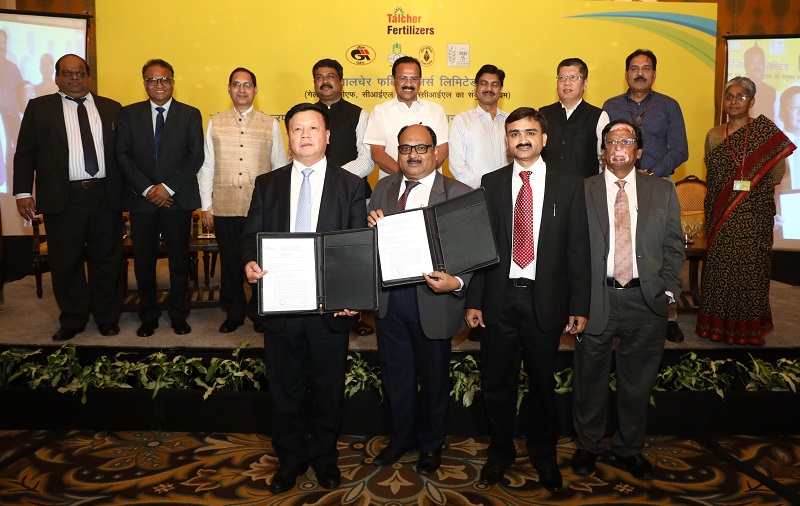 A ‘Ceremony of Award’ was held here on Tuesday in the presence of Minister for Chemicals and Fertilisers D V Sadananda Gowda, Minister for Petroleum & Natural Gas Dharmendra Pradhan and other distinguished guests.

The LSTK contract has been awarded to M/s Wuhuan Engineering Co. Ltd, China which has been selected as the LSTK contractor for implementing the coal gasification and ammonia/urea packages of Talcher Fertilizers Ltd. after following rigorous tendering process.

In order to augment the domestic urea capacity, the revival of closed fertilizer units of Fertilizer Corporation of India Ltd (FCIL) has been top priority agenda of the Government of India.

Accordingly, the Government has mandated TFL, a Joint Venture Company of nominated PSUs viz. RCF, CIL, FCIL and GAIL, to revive the Talcher unit of FCIL.

With an estimated investment of Rs 13,277 crore, the project shall produce 1.27 MMTPA of Neem coated Urea through gasification of a mixed feedstock comprising of high ash Indian coal and petcoke.

TFL has been allotted northern part of North Arkhapal mine as captive mine for meeting its coal requirements and petcoke shall be sourced from Paradip refinery of IOCL. The commissioning of this project is expected in third quarter of 2023.

The ‘Inauguration of Works’ of the project has already been done by Prime Minister Narendra Modi in September 2018 and since then TFL is executing many of the pre project activities at site which are essential before actual project work commences.

Activities like site development, provision of construction water and power, guest house etc. are currently underway at the Talcher site and shall be completed soon. Further tendering process for other major packages is also underway and it is expected that majority of the tenders shall be awarded before end of this Financial Year.

This project shall improve India’s self-sufficiency in Urea and promote agriculture growth thereby reducing the import of urea in the country which shall, in turn, is expected to have a significant effect on the LNG imports besides providing employment opportunities to the local populace and also flipping the ancillary industries in the region.

Further success of this technology shall open up new areas in the Indian energy context leading to alternative use of high ash Indian coal in the areas other than conventional thermal power production.