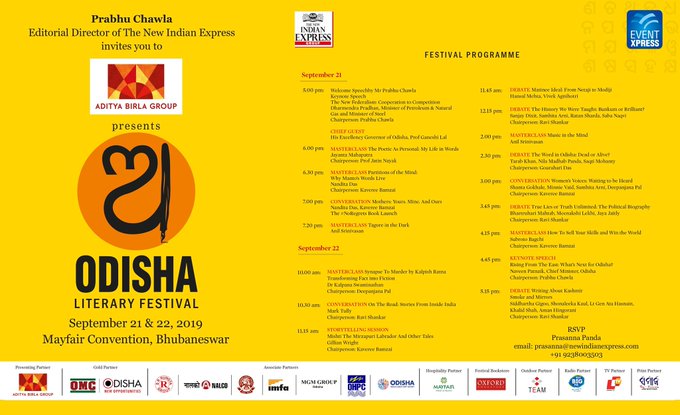 The festival that brings together authors, scholars, filmmakers, musicians and politicians under one platform, will begin in Bhubaneswar on Saturday.

It will be inaugurated by Governor Prof Ganeshi Lal in presence of Editorial Director of The New Indian Express (TNIE) Prabhu Chawla and legendary poet Jayanta Mahapatra.

Prof Lal will open the festival with a special address on ‘New Ideas for New India: The View from Raj Bhavan’ which will be followed by a conversation on ‘The Poetic As Personal: My Life in Words’ between Jayanta Mahapatra and Jatin Nayak.

Director of ‘Manto’ and activist Nandita Das will deliberate on ‘Partitions of the Mind: Why Manto’s Words Live’ and later launch a book, ‘No Regrets: The Guilt-Free Woman’s Guide to a Good Life’, authored by Kaveree Bamzai. The day will end with a session on ‘Tagore in the Dark’ by classical pianist and music educator Anil Srinivasan.

The second day will begin with an interesting storytelling session for children by Gillian Wright who will narrate stories like Misthi the Mirzapuri Labrador’ and other tales. Detective fiction writer and novelist Kalpana Swaminathan will talk about ‘Transforming Fact into Fiction’ with author Deepanjana Pal and it will be followed by a crime writing session by authors Damyanti Biswas and Kishwar Desai.

Celebrated author and veteran journalist Mark Tully will speak about his journeys through India in a session titled ‘Conversation On The Road: Stories From Inside India’ and filmmaker Vivek Agnihotri will discuss ‘Matinee Ideal: From Netaji to Modiji’ with columnist Ashutosh.

The second day will see another unique concert ‘Music in the Mind’ by Srinivasan which will be followed by a debate on history between authors and columnists Sanjay Dixit, Samhita Arni, Ratan Sharda and Saba Naqvi.

Writer Debashish Panigrahi and young authors Tarab Khan and Saqti Mohanty will deliberate on if the ‘Word in Odisha Dead or Alive’ in a session moderated by Gourahari Das.

The festival also includes session on women’s voices in literature which will be discussed by Pal, Shanta Gokhale, Kishwar Desai, Minnie Vaid and Samhita Arni besides, a debate on political biographies by Bhartruhari Mahtab, Meenakshi Lekhi, Jaya Jaitly and Ashutosh.

Chairman of Odisha Skill Development Authority Subroto Bagchi will hold a masterclass on ‘How To Sell Your Skills and Win the World’ and his session would be followed by a discussion on ‘Writing About Kashmir’ between authors Siddhartha Gigoo, Shonaleeka Kaul, Lt Gen Ata Hasnain, Khalid Shah and Aman Hingorani.

The two-day Odisha Literary Festival will conclude with Chief Minister Naveen Patnaik discussing ‘Rising From The East: What’s Next for Odisha?’ with TNIE Editorial Director Chawla. 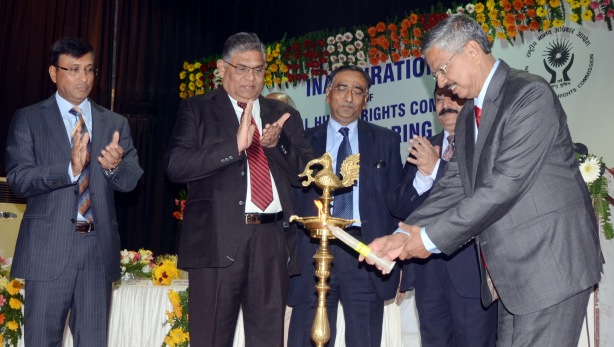 22k cases from Odisha registered with NHRC in last one year

Polavaram project affected tribals should be displaced with rehabilitation: NCST