Bhubaneswar: Odisha has been reckoned as the best state in rural skill development both at the national and international level.

The government of India has recognised Odisha as the “Best Skilling State”. Europe India Foundation for Excellence has also awarded Odisha as the ‘Best State in Rural Skill Development’ in global skill development meet organised at UNESCO headquarter of Paris.

Because of applauding performance continuously over fiscal years of 2016-17 and 2017-18 in Dindayal Upadhaya Grameen Kaushal Yojana (DDUJKY), the Government of India have recognized Odisha as the “Best Skilling State”.

Reviewing the progress of the skilling and placement activities under DDUJKY, Chief Secretary Asit Tripathy on Tuesday directed the Odisha Livelihood Mission (OLM) to intensify the motivational activities at village level through contact with potential households having drop-out children in the age group of 18-35.

It was decided in the meeting that the individual candidate wise tracking and follow up would be taken up from the level of household to training, employment and post-employment status for one year.

Presently, three MSCs are operating at Tiruppur in Tamilnadu, Bengaluru in Karnataka, and Bhiwadi in Rajasthan. These centres register the skilled youths migrating for job, organize health camp for them, provide them with the legal literacy and emergency support.

The centres remain in coordination with the employers and arrange weekly get-togethers. The centres also provide handholding and grievance redressal support to the youths.

A three-year action plan from 2019-22 was discussed in the meeting. Target was fixed to train around 1,50,000 youths within 3 years under placement linked programmes of DDUJKY with a financial outlay of around Rs 1546 crore.

Chief Executive Officer of ORMAS Smruti Ranjan Pradhan appraised that in the year 2018-19 Odisha occupied the 1st position in the country by training 41,308 youths from among whom 31,698 were provided placement in organized sector. 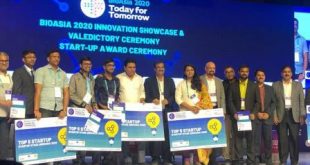 Biotechnology Park to come up in Bhubaneswar