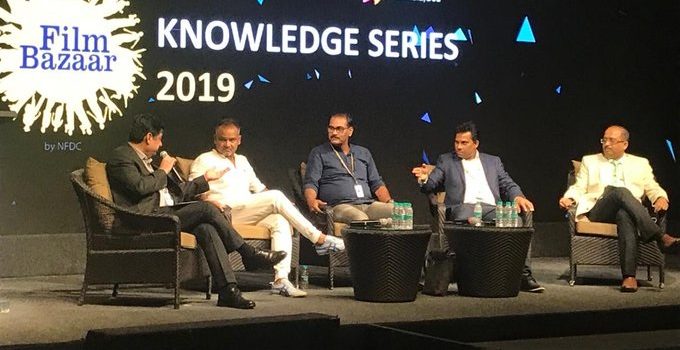 Goa: Odisha spotlighted its attractive film policy and showcased its scenic destinations among eminent personalities and various stakeholders from the Indian film industry at the 50th edition of the International Film Festival of India (IFFI) being held in Goa.

He highlighted how Odisha is enhancing the ease of filming and facilitates the development of related institutions, and a single-window approval process has been adopted for the shooting of films in the state.

Addressing the delegates, Jawale said, “Odisha is now gaining prominence among tourists and filmmakers. To encourage filmmakers to shoot in Odisha, a subsidy of up to Rs. 2.5 crore will be provided to English/Hindi/International/other language cinemas that promote Odisha, its culture, heritage, and tourist destinations.”

“Be it the virgin environs of Odisha’s beaches and Chilika lake, the tranquility of the Diamond Triangle Buddhist Circuit, the unique synthesis of the modern and traditional in Smart Temple City Bhubaneswar or the spiritual ethos of Puri – shooting films here is sure to give filmmakers greater cinematic output at lower cost” added Jadhav.

“The first Film City Project in the State will be eligible for a capital investment subsidy up to Rs 30 crore while land for these projects will be allotted at a concessional rate as per the provision of Industrial Policy Resolution-2015 or the guideline fixed by the Government from time to time,” added Jawale.