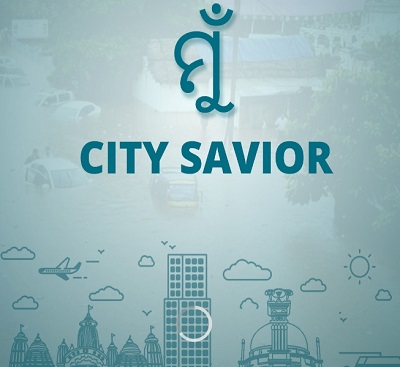 Bhubaneswar: Uncontrolled urbanisation often leads to urban flooding and Temple City is facing the crisis twice or thrice almost every year as an impact of climate change, drainage blockage and encroachment in main drains.

But, now here is an information communication technology (ICT) based solution, which would help in curbing the menace in the future.

Called “Mu City Savior”, an app will now help citizens in minimising the impact of urban flooding in some vulnerable locations across the city.

The pilot project was taken up involving citizens in Nayapalli and Shatabdi Nagar.

The Digital solution consists of a volunteer app called “Mu City Savior” which will allow citizens to report about the current status of identified critical points in drains. The app will collect three information from citizens i.e. is there any garbage in drains, what is the water level in drains, and what about the water flow in drains.

This information will go to analytical system directly, where it will get analyzed along with pre-existing static information such as vulnerability map of the project area, drainage type, and capacity, land use type, number of populations staying in the locality, etc. based on this information the analytical system will send notification to city officials with a priority list on real-time basis.

Therefore, using that list the city officials can act accordingly and keep drains clean to reduce the impact of urban flooding.

It can be noted here that the major causes of such incidents were mostly obstructions in drains due to the direct disposal of solid waste in the drainage network, which gets exaggerated during monsoon due to the high volume of runoff water.

Therefore, to keep the city unflooded and reduce the impact of urban flood it is very important to continuously monitor our drains and keep it maintained so that, during rains, drains can accommodate extra volume runoff water.

Continuously monitoring and maintenance of all drainage networks manually in the city will be extremely difficult without the support of responsible citizens. Hence, the digital solution is ready and being implemented in the project area for testing.

The app is being promoted through several community events by students from local colleges and educational institutions in Nayapalli and Shatabdi Nagar. Now, the app is available on Google Play Store.

In the event, the BMC Additional Commissioner citing the example of Greta Thunberg encouraged children also to be part of their efforts against urban flooding and climate change.

The senior BMC official also asked the children to contribute as a change agent against climate change but not a mobile application user. To generate awareness among children about climate change, urban flooding, and proper disposal of solid waste BMC with GIZ also jointly organized street play, drawing and quiz competitions on the same day of launching.