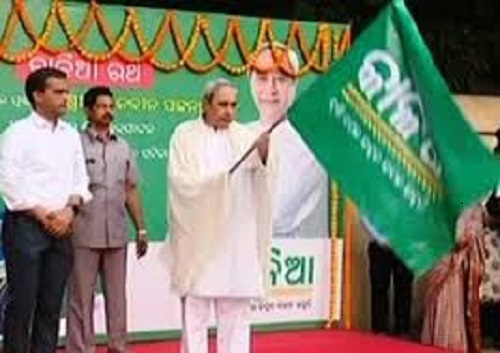 Bhubaneswar: Hundreds of members of Naba Nirman Krushak Sangathan on Thursday took out civil disobedience rally towards Naveen Niwas protesting the reduction of financial assistance to farmers under KALIA Yojana.

They demanded that the state government should provide assistance under KALIA Yojana to the farmers as promised by the government.

“The state government has failed to provide assistance under KALIA Yojana. The Naveen Patnaik led BJD government has cheated the farmers in the state. The Chief Minister should keep its promise,” said the outfit’s national convenor Akshay Kumar.

On the other hand, the Bharatiya Janata Party (BJP) also targeted the state government for reducing the assistance amount under the KALIA scheme and merging it with the PM-KISAN Yojana.

“BJD government garnered votes by promising farmers to provide Rs 25,000 in five installments under the KALIA scheme. Now it has reduced the amount to Rs 4,000. CM Naveen Patnaik should clarify whether the scheme is still alive or dead,” said senior BJP leader Prithviraj Harichandan.

Notably, the Odisha government has decided to merge KALIA Yojana with PM-KISAN Yojana. With the merger, the farmers will get Rs 10,000 annually -Rs. 6,000 from PM-KISAN and Rs 4000 from KALIA.