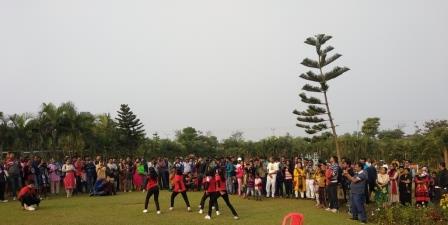 
Bhubaneswar: More than 3,000 gathered in two leading parks of the Temple City, as the first Park Utsav unfolded its mystic attraction as the park goers participated in various infotainment activities.

The Park Utsav was held at Indira Gandhi Park and Madhusudan Das Park.

Vice-Chairman Bhubaneswar Development Authority, who is also the Municipal Commissioner of Bhubaneswar Municipal Corporation (BMC), Prem Chandra Chaudhary welcomed all park-goers and invited them to have a new experience in city parks, which will be organized on Sundays at alternate locations across the city.

Priyanka Priyadarshini Swain, a student of Class VI, who participated in the group dancing event at Madhusudan Das Park, Pokhariput, said the encouragement from the viewers was very inspiring and she would love to participate more in future.

She was part of the troupe from Bichraj School of Art and Culture, Chakeisiani, and eight students came all the way from the institute under the guidance of their teacher Upendra Pradhan.

Sambit Samanta, a cost accounting professional termed the event as very successful and hoped that like the success of Patha Utsav, the Park Utsav will also be loved by the citizens.

Former Corporator Hrudayaballabha Samantray said, “The event is a very good step by city authorities towards providing a new experience in city parks.”

Nrupakishore Patnaik, a senior citizen said, “The Park Utsav will be loved by all from kids to elderly as it will provide education, awareness, and entertainment to the park users.”