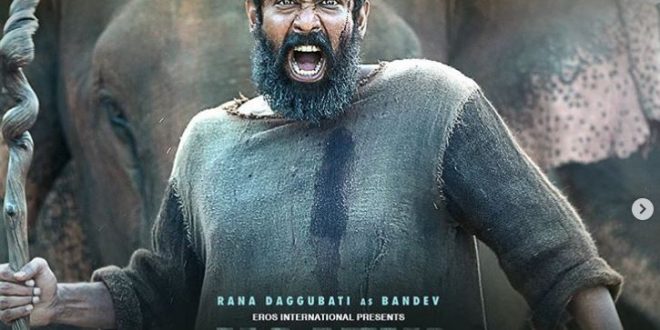 
Mumbai: The adventure drama Haathi Mere Saathi is set to release on April 2.

The makers announced the release date of Haathi Mere Saathi, a trilingual film.

The makers have also unveiled a new poster in which Rana Daggubati can be seen standing in front of an elephant.

The film revolves around the relationship between a mahout and his elephant. The film will also release as Kaadan in Tamil and Aranya in Telugu.

Rana Daggubati is the protagonist in all three titles.

While Pulkit Samrat plays Rana’s parallel lead in the Hindi version, southern actor Vishnu Vishal essays the role in Kaadan and Aranya. The heroines in all three versions are Shriya Pilgaonkar and Zoya Hussain.

The movie is inspired by the unfortunate event of humans encroaching upon the elephant corridor in Kaziranga, Assam.

The film Haathi Mere Saathi is produced by Eros International. The film’s VFX has been done by Prana Studios, who have worked on Hollywood biggies such as Life Of Pi, Thor and the Hindi film, Detective Bymokesh Bakshi.