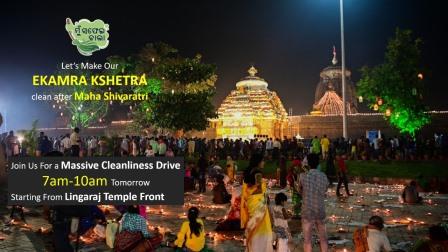 
Bhubaneswar: With an aim to keep its beauty intact by preserving its heritage value, the Bhubaneswar City Administration has decided to organise a massive cleanliness drive in The Old Town area (Ekamra Kshetra), which is the heritage hub of the Temple City, on Sunday morning.

Ekamra Kshetra, the abode of Lord Lingaraj, drew over lakhs of devotees from across the state on Friday on the occasion of Maha Shivaratri festival.

Reiterating its focus on cleanliness, the Bhubaneswar Municipal Corporation (BMC), Bhubaneswar Development Authority (BDA) and Bhubaneswar Smart City Limited (BSCL) on Saturday decided to organise a mega cleanliness drive in the entire Ekamra Kshetra under ‘Mu Safaiwala’ campaign to clean up the arteries and sub-arteries of the area.

The sanitation exercise will be held from 7 am to 10 am and the city authorities have urged everyone to join in order make the initiative successful.

More than 500 people, including staff of BMC, BDA and BSCL, NGOs, school and college students, Safai Karmacharis, among others will be engaged in the programme.

Besides, celebrities, especially renowned personalities from the Old Town area, including noted writer Anant Mohapatra and writer-historian Anil Dhir are also joining the event to encourage and motivate people participating in the exercise.

The drive covers various areas such as the 2.5 km Rath road from Lingaraj Temple to Mausima Square, Bindu Sagar, Giani Zail Singh Road, among others.

“The aim is to launch an initiative which not only help in cleaning up the city – one spot at a time – but also create awareness among citizens to keep their environment and surroundings clean,” said BMC Commissioner, Prem Chandra Chaudhary, who is also the Vice-Chairman of BDA and CEO BSCL.

Urging everyone to join in the tomorrow’s cleanliness drive, he also added, “Through the event, we are planning to spread awareness about the plastic ban, segregation of waste and sanitation in order to beautify the city and boost its image globally.”

After the clean-up programme, volunteers will hand over the waste to civic officials, who will further segregate it into wet and dry waste.

The State Government has recently announced a package for revival and preservation of the heritage value and grandeur of Lingaraj Temple and its surroundings on 66-acre of land.