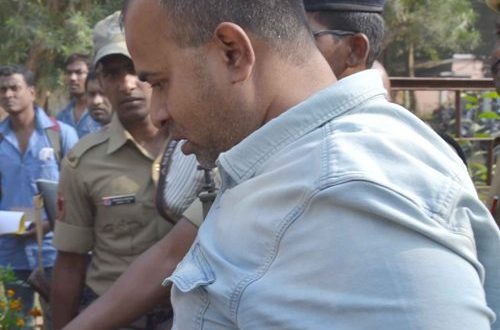 BHUBANESWAR: The Commissionerate Police on Friday arrested two dreaded criminal brothers-Sushant Dhalasamant and Sushil Dhalasamant-on charges of extortion and tender fixing, while political link of the two brothers has come to fore.

They were arrested from a rented house in Pokhariput area here.

Police Commissioner YB Khurania said a team from Cuttack raided the house and arrested them.

Initially, three revolvers, 108 rounds of bullets and Rs 10 lakh cash were seized from their possession, said the police commissioner.

He said Chauliaganj police had registered a case against two brothers following Cuttack SDJM court direction while Sushant Dhalsamant, a wanted in three murder case, was absconding since 2004.

Police said, Dhalasamant brothers, who started their criminal activities in 1993, are involved in various activities like murder, dacoity, extortion and tender fixing activities.

But people were afraid of lodging complaint against them, the commissioner said appealing to the citizens of Cuttack those have been victimised by their criminal activities to come to police fearlessly and lodge their complaint.

The Police, which raided their house at CDA, Cuttack, have seized a cash of Rs 2 crore and several luxurious vehicles.

“Sushant mostly stays at Vishakhapatnam. His crime network is also extended till Mumbai. We suspect their network in other cities too, Khurania said.

Meanwhile, the political link of Dhalasamant brothers has cropped up. Union Petroleum Minister Dharmendra Pradhan and former Congress MP Bhakta Das had shared a dais with him at a meeting in Cuttack organised by a youth association.