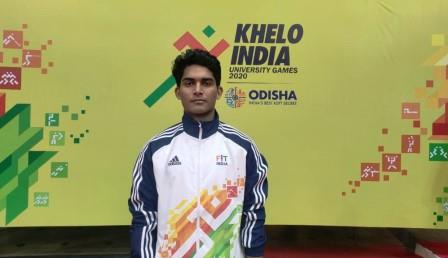 Bhubaneswar: Pullela Gopichand’s talent spotting abilities are very well known in the badminton circuit, so it should come as no surprise when his wards end up on the podium at almost every event they enter.

India’s no. 1 ranked doubles player Krishna Prasad Garaga is another one to have benefited from this insight.

Krishna started playing badminton at eight years of age in Kakinada under the supervision of his father, G Gangadharam.

Very soon though, he had exhausted competition in the town, forcing him and his family to move to Hyderabad and enroll him at the Gopichand Academy to help further his career.

“When I landed up at the academy, I was a singles player. But Gopi sir saw me play and felt like I had the potential to do better at doubles. He also wanted players to embrace doubles at a younger age,” Krishna says.

In the juniors, he was paired with Satwiksairaj Rankireddy, one of India’s top doubles players right now and has been ranked in the top 3 in the juniors world rankings.

Krishna, a second-year B.Com student at Andhra University, still trains at the Gopichand Academy and works under Gopichand as well as Indonesia’s Flandy Limpele, a renowned doubles specialist and the coach at the academy.

“When you are playing professional sport it is tough to pursue a full-fledged education,” Krishna says.

“To be fair I struggle to get the optimum balance between academics and badminton, and I don’t even try,” he laughs.

Having helped Andhra University win Gold in the badminton Men’s team event at the Khelo India University Games 2020, Krishna’s focus is now on loftier goals, those for India.

“I’ve paired with someone new recently, so the immediate goal is to get some games under our belt, get some ranking points and qualify for the bigger tournaments,” he says.