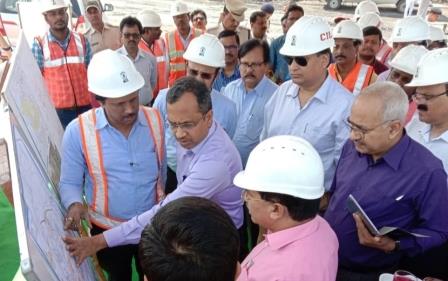 Agrawal, who is on his two-day maiden visit to subsidiary company MCL, inspected mining operations at Asia’s largest Talcher coalfields under its command in the state of Odisha.

He reviewed the production and dispatch operations of MCL, which alone contributes about 20 per cent to the total coal production in the country.

BN Shukla, Chairman-cum-Managing Director, MCL who accompanied the Chairman during his coalfields visit, also briefed him on current and future prospects of the company, particularly in Talcher.

The Chairman, who was also accompanied by S N Tiwari, Director (Marketing), Coal India, expressed his satisfaction over positive growth MCL has registered after November 2019.

Asserting that extended and heavy monsoon season has negatively impacted coal production from MCL, Agrawal said, “Company should focus on the increase in productivity, thereby increasing the coal production, with due regards to safety (of men and machinery)”.

During his visit to coal mines, including Kaniha OCP, Ananta OCP, Hingula OCP, and inspection coal corridor, the Chairman interacted and motivated with the field teams.

He also met Talcher MLA Brajkishore Pradhan at the shrine.