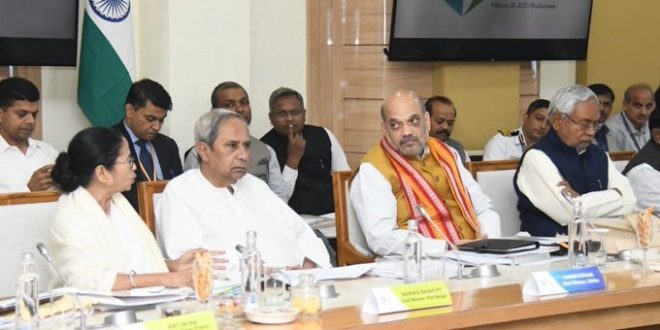 He raised the issue of the increase in royalty on coal.

Chief Minister, West Bengal raised the issue of delay in payments of GST proceeds and devolution of funds.

Chief Minister, Bihar asked for the formulation of the National Silt Management Policy to take care of floods in Ganga river.

Addressing the meeting, hoped that this would be a fruitful meeting where all the issues having Centre-State and inter-State ramifications will be resolved with consensus.

He stressed that according to Prime Minister Narendra Modi’s vision, after due deliberations, decisions taken by consensus should be implemented to further strengthen the federal structure of the country.

The Home Minister also expressed his satisfaction at the usefulness of Zonal Council mechanism and informed that more than 70% issues have been resolved based on the recent meetings of the Zonal Councils and remaining issues are also under resolution.

As per the vision of Prime Minister Narendra Modi, the Home Minister stated that Eastern region needs more focus to fast track its development.

He hoped that today’s meeting would be decisive and fruitful in resolving the issues listed in the agenda.

He stated that besides the issues listed in the agenda, he would also like to add and discuss issues relating to law & order and administrative reforms so that this Council meeting is helpful in giving further pace to the development of the country.

He also laid stress on expanding banking services to ensure that the benefits are available even in the remotest areas.