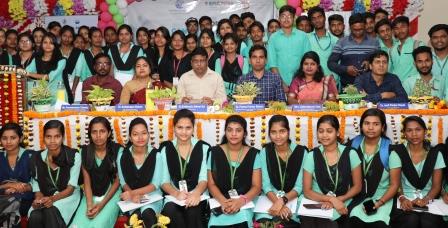 Bhubaneswar: Kalinganagar in Odisha’s Jajpur district is one of the 122 cities (non-attainment cities) in India that are worst affected by air pollution.

In the recently released Odisha Star Rating, 5 out of the 6 participating industries from Kalinga Nagar have been rated as one star (lowest environment complaint). According to the University of Chicago’s Air Quality Life Index, the average life expectancy of Kalinga Nagar residents could increase three years if WHO air quality standards are met.

He was addressing at an awareness workshop jointly organised by State Pollution Control Board, Energy Policy Institute at the University of Chicago (EPIC India) and Tata Center for Development at UChicago(TCD).

Themed as ‘Can citizen engagement contribute towards cleaner air in non-attainment cities’, this workshop witnessed technical presentations on different aspects of air pollution.

Talking on what a common citizen can do to prevent air pollution, Dr. Sudhamayee Behura, Head of the Department, Environmental Science, Raghunathjew College told, ‘Controlling air pollution at the source level, using right kind of fuel, more dependence on public transport can help.’

Shubhadarshini Das, environmental engineer of the State Pollution Control Board, told that a comprehensive action plan has been prepared for control and abatement of air pollution in the non-attainment cities by different departments of Government of Odisha.

Air Pollution Emergency Response Plan (APERP) is also being prepared for different departments of the Government of Odisha to restore urban air quality and take precautionary measures to minimize health risk at the time of emergency situations in terms of air quality.

The program aims to encourage responsibility and healthy competition between industries in order to reduce emissions and achieve better regulatory compliance.

Parambrahma Tripathy, Communication and Outreach Coordinator of EPIC India proposed the vote of thanks.