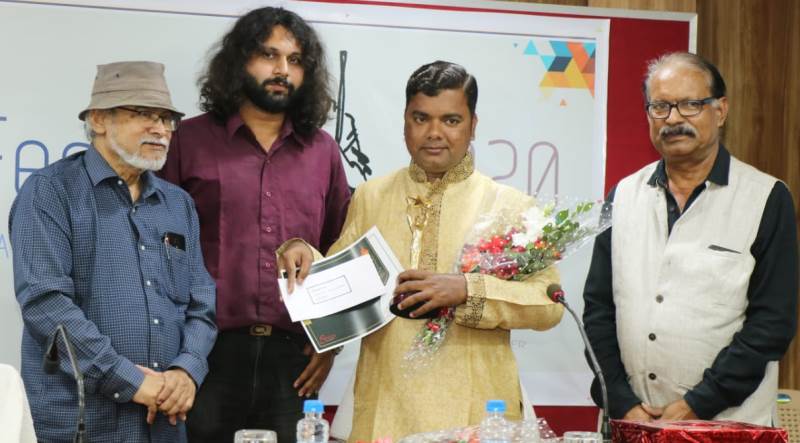 Bhubaneswar: As the world is celebrating the 150th birth anniversary of Mahatma Gandhi, production house SPARSH organised the 3rd edition of short film festival – IGNITE with the theme ‘Values of Gandhi’.

The award-giving ceremony of IGNITE Film Festival 2020 was held on Wednesday at the Utkal Chamber of Commerce and Industry, Bhubaneswar.

IGNITE Film Festival 2020 invited films made on the philosophies of Gandhiji.

Films from participants made on any values of Mahatma Gandhi which will make people aware and conscious about the fact that Gandhiji can still exist in our life.

Speaking on the occasion, Sampad Mahapatra said, “The theme of IGNITE Film Festival 2020 was based on Gandhiji which was very challenging. To develop a story on current issues like health or environment is easy but to create something out of the past events is quite challenging and I appreciate all the participants for their initiatives in making a film on Gandhiji which is a 100-year-old story.”

Encouraging the participants, filmmaker Amartya Bhattacharya said, “Hats off to IGNITE Film Festival for choosing Gandhiji as the theme which is a very fantastic topic as well as one need to have the courage to choose this topic for developing a film. I appreciate all participants for coming forth with such many stories and supporting this noble cause.”

Congratulating the winners, Sandeep Sahu said, “Although this year there were few entries in comparison to last year, it was difficult to select best 3 among a handful of films. Yet, I congratulate all participants and wish them all the luck to all the participants who have given their utmost efforts to be a part of this festival.”

Sheikh Gulzar Husain, a young filmmaker dominated the evening by winning the Best Film award for the movie ‘In Memory of Bapu’ and prize money of Rs 20,000.

Sangram Keshari, another young filmmaker bagged the 1st runners up award for the film ‘Gandhi Aau Nahaanti’ and prize money of Rs 10,000.

The movie ‘Swachha Sankalpa’ by Gyanaranjan Sathua won the 2nd runners up award and prize money of Rs 10,000.