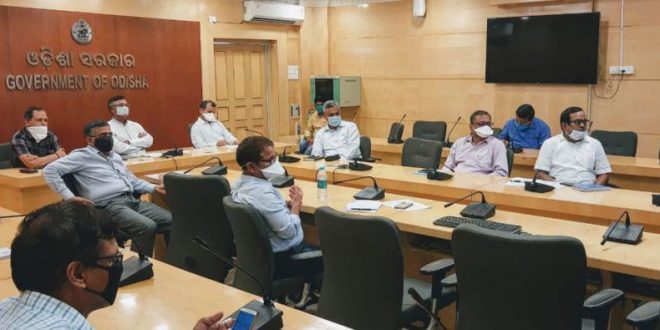 Cyclone Amphan: Around 7 lakh people likely to be affected in Odisha


Bhubaneswar: The Odisha government has predicted that around seven lakh people in 649 villages along the sea coast are likely to be severely affected due to the cyclone Amphan.

Reviewing the cyclone preparedness with Chief Secretary Asit Tripathy through video conferencing, Cabinet Secretary Rajiv Gauba on Saturday appreciated the preparedness of Odisha for the impending cyclone amidst the operations for Covid-19.

“As per the predicted path of the cyclone till now, around seven lakh people in 649 villages along the sea coast are likely to be severely affected,” said Tripathy.

He said the standing crop in lakhs of hectors particularly, ripe summer paddy, pulses & oil seeds, cashew, mango, coconut and vegetables are likely to be damaged in the heavy rainfall and wind.

However, the Chief Secretary said that all 12 costal districts have been kept under alert and they are prepared for any eventuality of change in track of the cyclone.

Tripathy appraised, “We are in constant touch with IMD regarding the updates about the cyclone. The ODRAF, Fire service and NDRF teams are ready for emergency rescue and relief operation. They have been equipped with necessary instruments for such operation. Steps have been taken to preposition them in strategic points.”

Since power infrastructure is likely to be affected more due to cyclone Amphan, the power gangs are being prepositioned to start the immediate restoration as the cyclone passes away, he added.

“Around 403 cyclone shelters have been identified in the area likely to be affected by the cyclone. Around 105 of such shelters are presently being used as temporary medical camps and quarantine centers for covid care. Covid test of the persons accommodated in these centers are being done expeditiously on priority so that persons with negative report can be sent for home quarantine,” said the Chief Secretary.

As a contingency arrangement, alternative buildings have also been identified for use as cyclone shelter, in case of the need for more evacuation, he added.