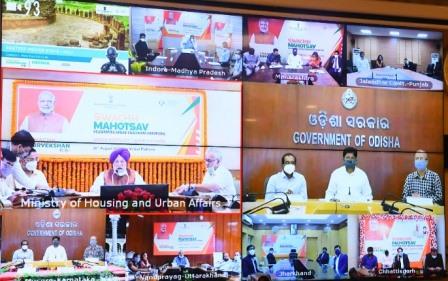 
Bhubaneswar: Odisha has bagged two national awards for the first time in the “Swachh Survekshan”.

Results of “Swachh Survekshan-2020” have been declared by the Union Ministry of Housing and Urban affairs during “Swachh Mohatshav” held in New Delhi on Thursday.

Minister of Housing and Urban Affairs presented the awards in a virtual ceremony where all the states and cities were connected through web.

Housing & Urban Development Department of Government of Odisha has bagged the “Fastest Moving State Award” at the national level and Berhampur Municipal Corporation has received award under “Innovation Award” category.

The award for the state has been received by Pratap Jena, Minister, Housing & Urban Development accompanied by G Mathi Vathanan, department secretary.

The award for Berhampur Municipal Corporation was received by the Collector, Ganjam, Commissioner of the Corporation and other officials.

Minister Jena after receiving the award has expressed his gratefulness to Chief Minister Naveen Patnaik.

He has also congratulated officers of H&UD department.